How do you restart something that had never been turned off? -Veronica Rossi, Under the Never Sky

It doesn’t matter how long I have taught, I always have trouble adjusting expectations with a new class. Of course I know these young children are new and are not at the same level as the class from the year before…it’s just…well, that class leaves when we are in such a good groove and it is hard for me to adjust a few months later. Summer vacation doesn’t seem to turn off the “old class” switch and turn on the “new class” switch.

No worries, it’s a short learning curve. It doesn’t take long to remind me of the need to start small and slow so that I can speed up later. We just finished our 10th day of school and we are currently using our iPads to enhance phonics instruction in small groups with Pocket Chart Pro, Starfall ABC’s and Magnetic ABC apps. We are also using them in centers as a choice in the math center and the ABC center. We’ve used Drawing Pad to draw a picture of something we like to do. Here is an example. She drew a picture of playing at school.

In math, we have used Connecting Cubes to count objects.

As well as experiment with counting and ten frames: 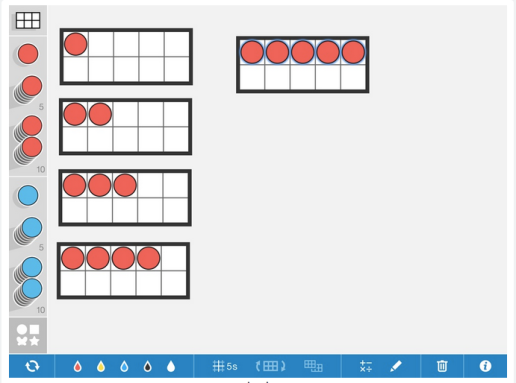 We have also learned how to take a screen shot so we can upload our work! By experimenting with different apps in the early days, the students have an opportunity to explore and free-play while we are learning the proper way to use the device.

So how do you restart something that had never turned off? In my world, at least, I have to hit the reset button and remind myself to start small. The first few weeks of kindergarten are all about exploring our environment, getting to know each other, and taking things one step at a time!

2 thoughts on “Here We Go Again”