Reality leaves a lot to the imagination.  -John Lennon

One thing young children are not lacking in is imagination.  They have no trouble pretending, playing make believe and suspending reality.  We’ve recently crossed over into the augmented reality arena. Augmented Reality (AR) allows for a digitally enhanced view of the real world. It allows the user to open or create layers of digital information on top of the physical world that can be viewed through a mobile device.  I’ve talked about our first foray in AR with Aurasma app here.  Aurasma is a great tool, and now my student’s are using the Chromville app to create in their own Augmented Reality worlds.

Chromville is a free app in the app store.  To use Chromville, you must first go to their website and decide which village you want to use.  There are 6 to choose from.  After you download and print the pages for your students, they then color the pages. NOTE: be careful that they don’t color over the village name in the corner of the page or else the AR part won’t work.  Once it has been colored, the student opens the Chromville app, selects which village he/she has colored and holds the iPad over the colored sheet.  The entire scene suddenly come to life in 3D and begin to move around.  There is a camera icon to take a screen shot also.  My students began playing around and inserting objects into the  view of the camera such as their hand or their foot and it became part of the scene.  After we took a screen shot, we uploaded the image into another app and wrote about our picture.  Here are a couple of examples.  You can see the items on the paper are in 3D.  On the iPad, these items are moving. 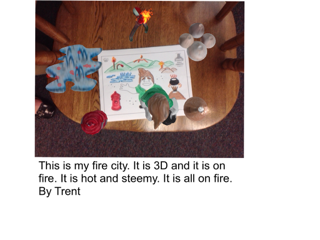 The great thing about the screen shot is that they appear to be in 3D also which makes it fun for the kids to write about it.  It’s a pretty good day when kids are excited about writing.    Students learn not just by reading and writing. Their learning is enhanced when they create and interact with their environment.

AR is not new.  Remember the movie Who Framed Roger Rabbit?  It’s gaining new momentum now with the mobile technology available and with the gamification of educational concepts. There are many different Augmented Reality apps available for all different age and ability levels.  You can search in your browser for AR apps and you will have a nice list to look through.

Obviously, there are more advanced uses for AR in older grades, but don’t tell that to my kindergarten students.  They are already exploring, creating and interacting with augmented reality and they get it! They have already given me a few lessons!

Give it a try!

Today we will do exciting new things.  Let’s get to it!