Life isn’t a matter of milestones, but of moments. -Rose Kennedy

I don’t do critters…creepy crawly, slimy, or slithery.  So when my students found this guy at recess yesterday, of course, they were fascinated.  I had to admit, he was pretty spectacular in a disgustingly slimy way.
Their intrigue, however, brought about some pretty awesome conversation and some creativity later.  They immediately asked questions like, “Is it a snail or a slug?”  “What does it eat?”  “Does it keep its shell or outgrow it?” “Is it helpful or a pest?”   Then came this little gem from a child…”I wish we had an iPad out here to take its picture for the science center.” Silence for a moment.  In that moment of silence, I’m thinking, “Me too…it would make a great picture.”  Suddenly, a child says, “Mrs. Meeuwse has an iPhone (awesome brand identification for a 5 year old).  She can take a picture of it and print it out!”  Huh?  Oh yeah…I DO have a phone! I quickly snapped a photograph and then many started asking if I could send it to their iPads with Showbie…And then I was asked if I could “text the picture” to their parents.  Several wanted them to see it.  In our quick 25 minutes of recess, about 20 was spent with this snail.
During all of the activity, I was preoccupied with their questions and getting a good picture, making sure the creature wasn’t injured or touched, etc…but afterward, I reflected back on that moment and was struck by my students’ thinking.  The immediate thought of including technology…using my phone to take a picture, putting it on their iPads with Showbie, texting the image to their parents…technology was at the forefront of their thoughts.  It was not an afterthought.  It was how these 5 year olds solved their questions and problem-solved in the moment.
Later in the afternoon, many chose to draw the snail in art and write about him in the writing center.  Here is one example from the iPad: 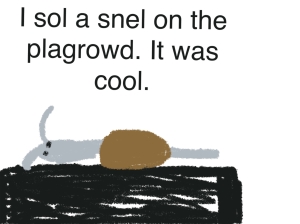 The child used Drawing Pad and saved it to his camera roll.  I used Simple Transfer to get it off his iPad on to my laptop.
Our thematic unit this week is Pumpkins and how they grow…but  yesterday, we took a detour and talked about snails.  The questions, vocabulary, and engagement were just too good to shut down at the end of recess.
I don’t necessarily recommend taking a detour every time the opportunity appears, but by being open to small moments in your day and allowing students to lead the way in their wonder and discovery, we begin to create students who think deeply.  I am always amazed at the complexity of a child’s mind and yesterday was no exception.  I was reminded just how naturally they incorporate technology into their lives and how curious they are about living creatures.  By being present in that very small moment, I’m certain I learned more than they did yesterday!
Today, we will do exciting new things.  Let’s get to it!

3 thoughts on “Making the Most of Small Moments”