People, truer words have never been spoken. The countdown is on here and we are doing a serious blitzkrieg to the finish line with 10 days of school remaining. Correction, 8 full days and 2 half days. There is no kind of tired like end of the school year tired, but with active, wiggly, excited, over the top five year olds, I must forge on. This tidal wave of crazy is unavoidable so I just get on the wave and ride.

In an effort to maintain some sanity, we are busy with a lot of choice writing. Many students choose to write more about interests from our thematic studies, others gravitate toward journal writing, and some want to capture/savor moments from field trips. During choice time, when students choose to write, they not only choose the topic but they pick the genre and the tools. As students engage in authentic work, they learn more about app functionality and share features with one another. In this sense, they really are teaching themselves. When they next use the app, their work is 100% focused on the learning (the writing, the communicating, etc), not the app itself.  Even the youngest students can learn quickly how to live and think inside of an app as well as move across apps.  Our job as teacher of writers is to focus on the writers and teach writers -not apps.  We need to help them apply and share learning, and grow their skills. So, in our classroom kids often choose between Pic Collage, Drawing Pad, Feltboard, Paper Desk Pro and Book Creator.

Here are a few samples of their work from the last two weeks. None of these were assigned. It was all their choice during their free writing times. 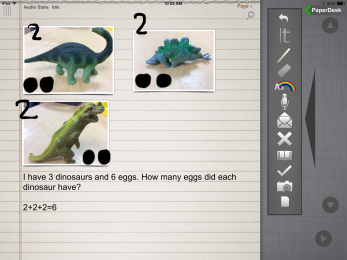 The children are app smashing, creating, and collaborating. Their energies are currently directed toward choice writing and not toward mischief (thank goodness). By using student interests and prior experiences, students are actively and authentically writing. We have a collaboration table in the classroom where students can go and discuss writing ideas with peers. These can turn into lively, rich conversations, which in turn, produce some pretty amazing writing.

For my readers who are nearing the end of your school year, hang on and ride the wave. It’s May…they can teach themselves!

Today we will do exciting new things. Let’s get to it.

The function of education is to teach one to think intensively and to think critically. Intelligence plus character – that is the goal of true education. -Martin Luther King

Thinking critically and intensively is not reserved for older students. We work diligently to create learning experiences in kindergarten that allow our young students to think deeply about various topics. Having iPads allows us to enrich learning experiences in a way that wasn’t possible before. One of the iPad tools that is often overlooked is iTunes U. Why iTunes U?

While there are a large number of free classes available on iTunes U, perhaps you should consider creating your own. With the end of the school year only a few weeks away, it seems odd to be thinking of adding new things to your teaching bag of tricks, but this is the perfect time to do so. You can use some of your summer to create your own courses. It is easy to do. Simply log into the iTunes U course manager using your Apple ID and add your content. What are the benefits to creating your own course?

Here is the link to a Spiders course I created for my kindergarten students as well as one for teachers on Personalized Learning and another course created by a 4th grade colleague about my school and how we innovate instruction using iPads.

iTunes U allows you to customize the learning experience for your students, even the youngest ones. It is also a great way to create a learning portfolio for students. Up to 5 people can collaborate on a course so you and your colleagues can work together and share the wealth. If you aren’t comfortable creating a full course initially, create a chapter and keep adding. It is easy to update any time.

If you aren’t already using iTunes U, consider giving it a try. It will open a whole new world to your students for learning and engaging in content.

Today we will do exciting new things. Let’s get to it.

Technology won’t replace teachers, but teachers who don’t teach with technology will be replaced. -unknown

Last week, our school iPads were replaced.  We were very excited to exchange our iPad 2’s for the new iPad Air.  Our old iPads served us well but were suffering from frequent app crashes. The replacement took about a week…no small feat when you are talking about over 800 iPads. The excitement over the idea of new iPads was suddenly replaced with the knowledge that we would be without iPads for a few days. My kids quickly realized this and asked, “Um, how will we do our work with no iPads?”  I responded, “I’m not sure…maybe we will do some worksheets.” Puzzled, the kids responded with, “What are worksheets?” You see, they had never completed one before.

It was definitely like going back in time and I’m certain I don’t ever want to teach again without having those devices. My students were used to having choices about their day and about demonstrating their learning. I was used to personalizing their learning and serving as a facilitator while they directed themselves. Student-centered and student-directed learning is one of the keys to educational change.

So, now we have our beautiful new devices and the kids immediately went to work. Their work. We have been working on number stories in their math journals. Even though I’m providing the number stories, there is still choice. For example, Sam had 7 buttons.  Some were blue and some were yellow.  How many of each were there?

Here are a couple of samples from my kids:

One was being a wise-guy, but still got the right number of buttons. By making these number stories open-ended, students have the ability to use multiple pathways to get to the answer. Another student and a partner, worked together to create what we call an “incredible equation”. One of the students was stronger in math (clearly, as he is able to multiply and divide at age 5) and the other was working on grade level. Together they made this: 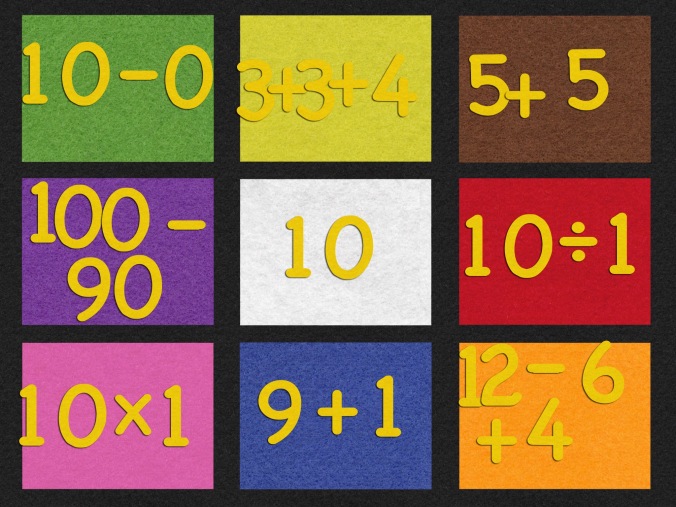 By letting my students work where they are, and not where a worksheet forces them to be, the sky is the limit. The iPads give my students the freedom to move on, to move up, and to be in charge of their learning.

So, yes, I am thrilled to have our iPads back. We saw first hand the power of the iPad in our classroom. Even though we have only 22 school days remaining, we are going strong to the end!

Today we will do exciting new things. Let’s get to it!